We had to leave Mammoth lakes only after being there for 2 nights, but oh well – that’s how this traveling trips are – can’t stay for too long in one place. Anyway – our next destination was beautiful and supposedly  foggy San Fransisco. BUT on the way in there was a planned stop in Yosemite National Park.

When you have only couple of hours to spare and want to visit a park that covers over 3000 square km it can be quite challenging. That’s why  we’ve decided to rent bicycles and follow a 11km tour designed by the park rangers that would get an average traveler just couple of hours to see what’s there to see :). 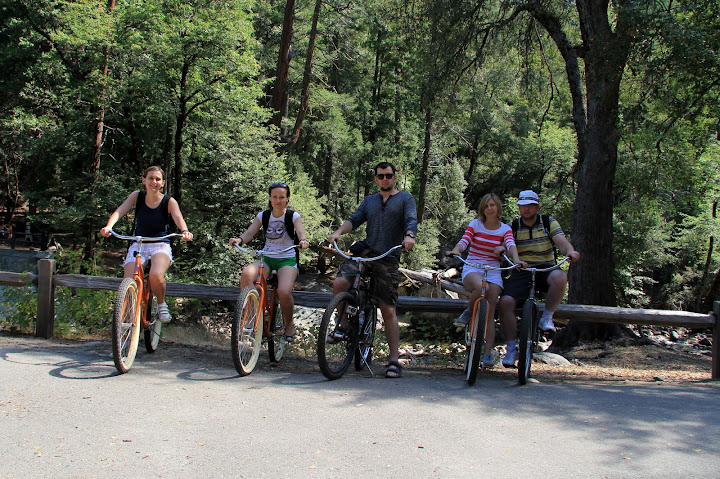 It was the best idea ever as the weather was great, the route was very easy – and we managed to see a lot – from some fantastic cliffs, river, lakes and  waterfalls through all sorts of wildlife – different types of squirrels and even encountered a coyote – he just crossed the road just in front of us – like it was his home (well perhaps it was and we were intruding 😉 . I have him on the go-pro video – but wont post it here yet – as I don’t really have time to edit all of the video material I’ve gathered. As a matter of fact I’ve recorded most of the Yosemite bike trip on the Go-Pro attached to my bike – and it will make quite a nice movie once properly edited (and hopefully will compensate for not to many photos from that day – as you can imagine it’s quite difficult to operate a camera while cycling 😉

Anyway – photos will have to be enough for now – so here they are!

That was yesterday – Today we spent our very first day in San Fransisco after arriving here yesterday evening – it was a long and very tiring drive through the mountains. Still totally worth it!
I’ll probably will upload San Fransisco photos one we’ll arrive to Los Angeles so stay tuned!