We didn’t have much time to spare in San Fran – only 2 before heading to Los Angeles (where we are at now).

One thing to note – it was very foggy at the bridge – but absolutely sunny and clear in the city. Weird is that place ;] 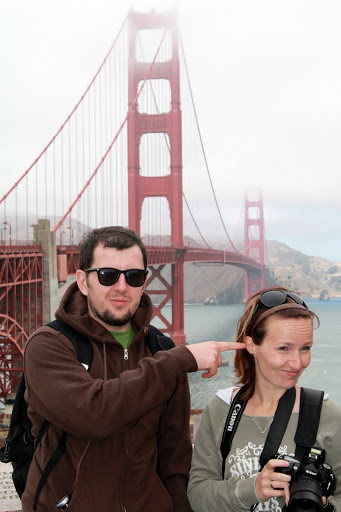 Part 2 of San Francisco is mainly the Alcatraz (absolutely the best tour I’ve ever been on) with couple of hours on Angel Island (not that nice). These photos are pending ‘Monika’s stamp of approval’ and will be uploaded shortly.

As I mentioned before – while I type these words we are in LA. In short – Los Angeles IS a shit hole. There is nothing nice about the city. It’s loud, crowded, busy and dirty. The only good thing about the city is… the mexican food (or at least the soup that we got served for dinner in our Hotel).

After arriving here yesterday we went to Universal Studios up in Hollywood. I wasn’t sure if I wanted to spend nearly $80 for a ticket, but eventually we all did – and was not disappointment. The place is a mixture of a theme park with some educational values (interesting live performance/show on special effects, or even the Studio Tour gave really cool behind the stage point of view).

Overall we spent there whole day – 10am to 5pm and really enjoyed it. Photos are still sitting on the SD card of my camera and I’ll upload them shortly.

Tomorrow the girls are planning to see some LA landmarks, and on Wednesday we are leaving back to Las Vegas (which for the girls will mean shopping – and for me – gambling :>).