Today I’ve woken up around 4.30 am (the jet lag is still in me), and decided to spend the morning planning the day. Original plan was to hire some bikes and cycle around the city, but considering it was supposed to be quite hot again I’ve figured it won’t hurt to fix up a backup plan. The plan was quite simple – get on the JR train towards Saga-Arishiyama and get lost in this west district of Kyoto.

After Monika got up we’ve decided to go with the backup – neither of us felt like  biking on such a hot day.

The train ride was quite short – just 15 mins (6 stops from Kyoto central) on the JR SAGANO line. Our JR Pass (the 14 day rail ticket) covered the cost, so that was nice. The weather also did not disappoint again and indeed it was yet another hot day. 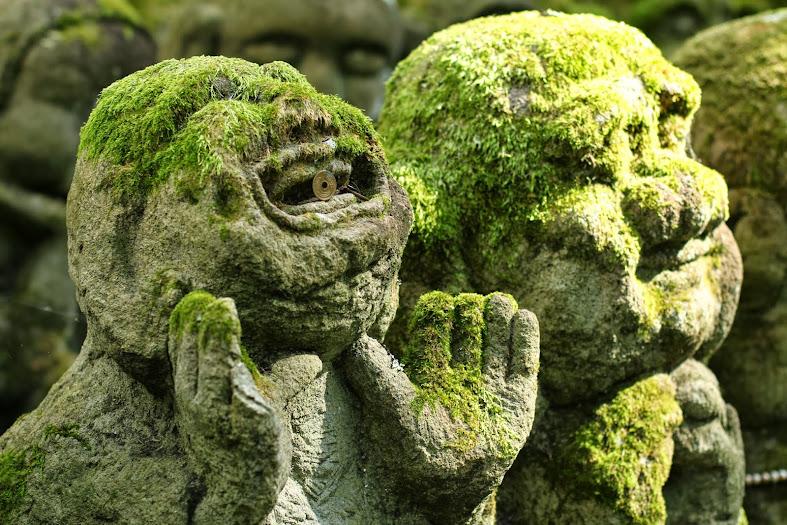 Once we arrived we headed towards Otagi Nenbutsuji Temple –  it was quite remote – good 40 mins walk uphill. It was worth it though. The temple is a home to over 1200 little statues made by different people from all over Japan during 1980s and 90s. We also happened to stumble upon local monk who was performing some sort of ceremonies. We kind of stalked him a bit, he didn’t seem to mind though. It was quite interesting to see how humble, simple  and ‘true’ he seemed. Totally different from what we are used to see in most of our catholic priesthood. 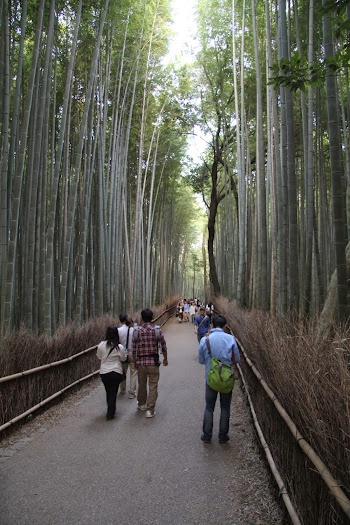 From there we headed back via Saga-Toriimoto Preserved Street stopping by here and there (mainly local souvenir shops) until we got into Nison-in  Temple – founded in 9th century – quite important in times when Kyoto was Japan’s capital city. We’ve taken a little break out there – just sitting for an hour or so enjoying the atmosphere and the view.

We were getting pretty tired and decided to head back towards the train using the famous bamboo grove. Bamboo is very important material for the Japanese people, who use  has been using it to manufacture various products, such as baskets, cups, boxes and mats at local workshops for centuries.

The photos are available HERE.

There is  some more great photos on Monika’s camera which I might add at some later time.

We were planning on sightseeing Kyoto only today, but since we discovered our 3 day local  pass rail ticket  (KANSAI THRU PASS) could be used on un-consecutive days, we’ve decided to go to Nara first (50min train ride of Kyoto) in order to avoid going there on Sunday.

We left pretty early (around 8) to get the most of the day (it was very nice, 26C, full sun) and  got back to Kyoto not too late (4pm ish)- so we used that extra time to get lost in the eastern districts of Kyoto.

You can read more about NARA here.

Our photo story is available  HERE

We made it! It was a long long looooong journey. After nearly 20h flights (via Dubai) we landed in Kansai Airport (OSAKA) shortly after 4pm local time . Got the train straight to Kyoto, where we are staying for 3 nights.

Since we are pretty tired today we didn’t get to do much – just got some food – planned a day trip to Eastern Kyoto Districts for tomorrow and hit the bed.

People are extremely well manner and nice, something that is not always given in our western civilization.