I normally don’t do outdoors bouldering. As a matter of fact I don’t think I ever climb a boulder outdoors (Ivy Chimney counts?).

We’ve decided yesterday that we just going to go and check out The Scalp today.

Excellent guides are available on climbing.ie wiki & dublinmountains.ie, so I won’t get into details of how to get there (other than the fact, that’s it literally around the corner from where we live).

Monika and I arrived just before 5pm and were promptly joined by Andrew and Louis. The plan was simple – explore the area and maybe even climb something.

We’ve ended up checking out some of the easier problems, with the most fun being The Tree Chimney.

It’s kind of funny, that even problems graded 5 suddenly are much more challenging, when the only pro you have are the hands of your spotter.
We all took turns, I topped it out first, and after that the ‘line of climbing’ got obvious and not that intimidating (If Michal can do it… 😉

We continued up the hill, attempting various easier problems, and ended up on the very top looking at Dom’s Wall. It’s a highball face with apparently good holds. Monika went highest, but also eventually climbed down. It wasn’t worth the risk of breaking ankles.

It was a fun afternoon, but I guess it makes more sense to come with someone who actually knows the climbs. Next time 🙂

We weren’t even planning on climbing on Sunday (having spent most of Saturday in the quarry), but it happened that the weather was still nice, so we went to see what’s going on.

We run into PG, Sonja and Diarmuid, and it was all thanks to him, who send me on the path of Dalkey mega-classics.

This involved my very first ascents of  Exertion*** HVS 5a and  Thrust*** HVS 5a.

These 2 are definitely in the category of must climbs in Dalkey and I’ll add them my regular go to routes.

Once we were done with the Upper Cliffs (Thrust), we walked back to the Base Camp, to meet rest of the crew enjoying the sunshine.

… when you want to lead GARGOYLE GROOVE DIRECT (*** 16m E1 5b). Some say the Direct finish is better and actual easier than the classic (HVS) right hand side mantle.

Yesterday seen my very first attempt on it.

For now, the route beat me, but I’l be back. One day. We did top rope it later afternoon that day, it provides very important piece of data – got to train more… 😉

Instead I did rather wet FIFTH AVENUE * 16m HS 4b. I find the small ledges by the top very pleasant, the overhang finish, not so much 😉

The highlight of the day however was the fact that Andrew decide to take hist first steps in leading. He started where most of us do – PARADISE LOST *** 17m VD.

Unfortunately I don’t think anyone taken photos of that, being busy watching Monika top roping that THE GREEN FOOL *** 16m E5 6b (also no photographic evidence of her getting to the top). It wasn’t easy. I don’t know how people lead it…

Andrew’s first lead came only  a week after he seconded me on these 2 Sundays ago:

And it was his maybe 5th time in the quarry. Keep going strong Andrew!

Looking down the Moonlighther – Not much protection there…

Appeal here: next time I ‘ll decide to lead that – remind me not to..

Today is the first time since 1994 when F1 weekend race takes place on May 1st.

Roland Ratzenberger was just 34 when he died at Imola, 30th April 1994. His dream was to become a Formula 1 driver.

Born in Salzburg, Austria, he began racing in 1983, before winning both the Austrian and Central European Championship. He continued to enter multiple racing events over the next four years, entering Touring Cars, British F3 and British Formula 3000, where he found mixed success, but his talent was in single seaters.

It was in 1989 however, that Ratzenberger was chosen to race in the Le Mans 24 hours for the first time. His first year at Le Mans was unsuccessful however, with his team, Brun Motorsport retiring after just three hours. Nonetheless, Ratzenberger persevered and continued to race for the next four Le Mans until his final Le Mans in 1993 where he finished fifth. 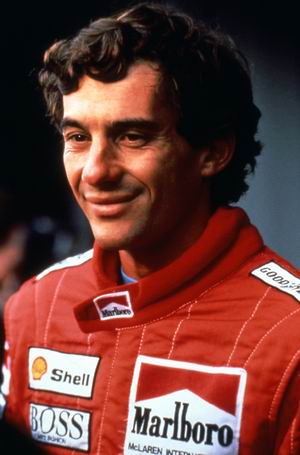 Senna was born in Sao Paulo, Brazil. He began racing karts in at Interlagos, Brazil’s Grand Prix circuit at the age of 13. He started his first race on pole position. From 1978, he entered the World Karting Championship. It was here that Senna claimed his karting rival “Terry Fullerton” was the driver who he had most satisfaction of racing against. Fullerton never made it to F1 but he was an extremely successful kart racer.

In 1981, Senna moved to England, where he began single seater racing, entering the British Formula Three Championship, racing for West Surrey Racing, five years before Ratzenberger would race for the same team.