Plans for today’s climbing changed at least 3 times in the last few days. The constant struggle of deciding between the Burren, the Mournes or staying locally in Wicklow is becoming a weekly ritual.

Glendalough was chosen. It’s never a bad choice, although I’m starting to run out of routes to climb (in my grade). This time it was Diarmuid and Monika who joined me. Having odd number of people isn’t necessarily a bad thing, things will just go slower than in a pair.
From the moment I parked at the upper lake I knew today will be spent at East Wing – home to the Forrest Ledge, where number of fantastic climbs are located.

We’ve actually been there already this year (early in the season) and if you are reading this blog u’d know I’ve fallen on gear on route called Ifreann Direct. It was time to try again. And this time I wasn’t planning on giving up easily.

But from the beginning…. First of all there was a large group with couple of top ropes on Acorn buttress, so we skipped it by walking around.

Then Diarmuid lead what normally is 2nd, 40m VS (4a) pitch of Forrest Raphsody all the way up to the Forrest Ledge.

Then the revenge time came:

IFREANN DIRECT *** 18m HVS (5b)A superb finger-jamming crack, intense and engaging, lasting all too short a time. Start about 4m right of the pillar on Ifreann where a steep, thin crack runs up the right side of the prominent, rectangular overhang. It is hardest at the start. Excellent protection.E. Goulding, J. Tobin, S. Rothery, P. Kavanagh, 6/3/1966.

I think I was a bit to relaxed (or maybe not relaxed enough?) and actually had to back off on my first attempt, just after 2 or 3 moves.  But in to time I got back on it and wouldn’t let go, until I clipped the anchors.

Monika and Diarmuid followed, although Mon had difficulties adjusting to finger jamming.

Indeed it’s not something you can easily learn. Kudos to her for topping out.
While this route is graded HVS, it’s technical mark is higher than your average HVS. At 5b it is not easy.

The real deal came next – Diarmuid decided he’s gonna jump on a climb on the Upper Tier called:

CONCRETE WALLFLOWER ** 28m E1 (5b)
An exciting climb requiring a studied approach; delicate to start with a strenuous finish.
Start 2m right of Aisling Arête, directly above the boulder embedded in Forest Ledge. Climb the wall just left of the thin seam: small wires. A breathless move gains a ledge at 13m (crux). Climb up steeply right to the overlaps. There are good holds high above.
K. Higgs, June 1977.

Technically, similar in grade than the route I’ve just done, but it’s not as well protected. As a matter of fact I know for a fact that I wouldn’t lead it because of the sparse gear placements. And that ladies and gents is the difference between HVS and E1…

I climbed 2nd, collecting all the gear and waited for Monika just after the crux to encourage her not to give up. Even on what is essentially TR this wall is pretty exposed and can be intimidating.

She didn’t disappoint and was up with me in no time.

In the mean time we run into Killian and Geraldine who were doing another classic upper tier route – Jackey (VS, 4c) 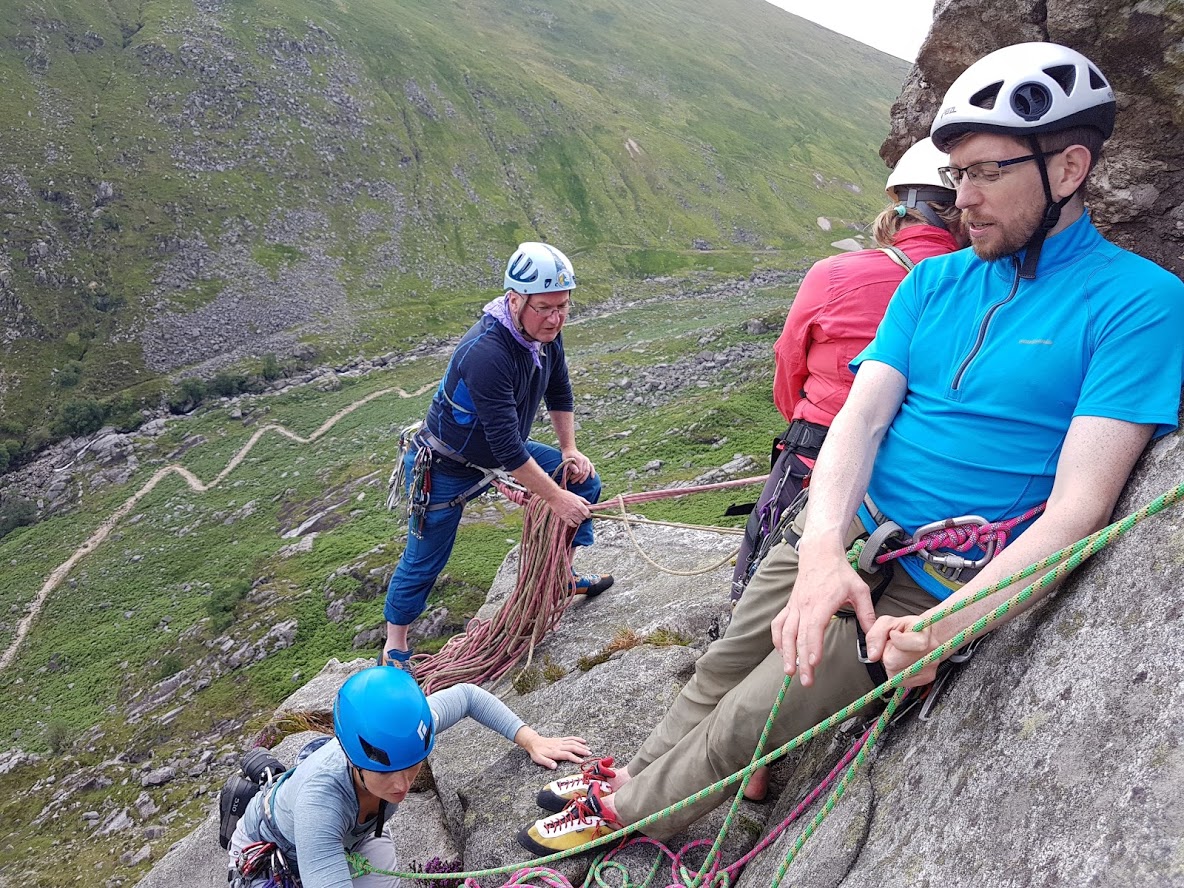 Both of our routes have the same belay/abseil, so I snapped this random photo, where every one is looking in different direction, but at least we all used 1 set of ropes to get down 😉

They went home (being at the crag since 9am) – we decided to do one more route.

LETHE ** 31m VS (4c)Start 4m right of Aisling arête, follow the tempting quartzy crack to a ledge and gain a crack on the right with difficulty. Up this with increasing difficulty until an escape left is possible at the foot of an ominous, steep groove. Continue up left past a perched block to finish.P. Kenny, F. Winder, S. Rothery, 25/4/1954.

A route I’ve done in previous years, a rather fun one for the end of the day (no photos though).

One thing I very enjoy doing is photographing other climbers on the other side of the crag. Today’s special was a team of 3 in what looks like a serious, all day siege of Sarcophagus.
These guys seems to take at least 5 hours to get up it, very often getting off route (is that even possible?), coming back and forth, doing belays in  weird places. Looked like loads of fun!

Either way, we all had a great day, that finished with a big burgers and pints at Glendalough Inn.  Great reward for great day’s climbing!