Last year during Easter I did the south/west part of the famous Wild Atlantic Way. This year we had a long weekend to spare to go and check out the Northern Coast.

Since Peter lives up North, Dave and I made our way towards Ballymena on Friday night, riding pretty much all the way in torrential rain. That was to be expected.

We met in the morning and followed the coastal road going through all the different villages, ending up in Magilligan point hoping to shorten our trip by taking a ferry to Greencastle. Unfortunately due to the fog the ferry wasn’t running that morning.

We turned around towards Derry, and then moved up north towards Malin Head – Ireland’s most northerly point.

Huge fog limited the visibility, so we didn’t stall and moved on.

We kept moving west and eventually settled to camp in Gweedore, co Donegal. At this point we’ve done around 350km on rural roads in poor weather, which is exactly what you’ll get when you travel to Northern Ireland. Pints were on the menu for sure.

Now, I’m not a big drinker these days so we didn’t stay up long. On top of that we had another long day ahead of us.

Quick breakfast and we were on the way. Plan was to ride to Donegal and part ways there – Dave & I would ride motorway back to Dub (via Sligo), and Peter would turn east towards Belfast.

Unfortunately Dave’s bike broke down shortly after we left… Worst possible place and time – Northern Donegal (somewhere around Dungloe) on a Sunday morning. There was nothing he could do, as the problem was of electrical nature. He called in for roadside assistance, and within 90mins a local recovery man showed up and collected the bike. It was going to be delivered on a back of a truck to Dub, while Dave would have to ride as my pillion.

At that point we decided to turn back, and head towards Letterkenny for lunch, and from there home. Few more hours and we were back in Dub, while it took Peter an hour and a bit to be home. All and all – good trip – pity we didn’t finish. Going to have to go again next year. Maybe start from Galway and go north this time?

Unfortunately today came the day when we had to part ways. Louis continues north, then back east along the northern coast towards Belfast. He’s planning to be home next Saturday. It’a amazing that after 4 days and over 1700km he’s not half way through the trip yet. A real long way round.

I know he was planning on taking a handy day today – just some 200km – and luckily he got the weather – a nice sunny day:

Dave and I had to go back to Dublin. We live 10 mins away from each other but returned separately.

I opted in for early start. Got up at  7 and by 8.30 was already on the M6 back to Dublin. The goal was to be home before major traffic hit the roads. It’s a very long weekend in Ireland. A lot of people will be coming home today.

It took around 2 hours. The motorway is great for fast travel, but it’s suuuper boring. Nothing to remember really. I did a quick stop in Athlone to put on another layer, as it was pretty cold today. Probably the coldest I’ve been during that trip.

The first thing I did upon arrival home was to unload the contents of the panniers and hit my local service station for a proper scrub.

I tried to ring up some of the local bike shops to see if they’d be opened today (I had almost all of the day ahead of me free, perfect for an oil and tires change), but It’s Easter Monday – everything is closed. I’ll have to make a visit tomorrow.

Dave in the mean time was making nice progress home,  with a pit stop at his auntie’s in Roscommon (it’s a slightly different route, hence we didn’t go together). I got a message from him later that he also made home safe.

I will remember these 4 days for a long time. It was a great adventure with a great company and some special moments. I’ve learned a lot (I’ll write about it more soon) and will definitely come to do the other half. Hopefully it will be later on this year!

Total traveled today: 230km – but it doesn’t really count, as it was all motorway 😉

Another long day on the bikes. We left Dingle early enough, which is surprising as last night we went for a bite and couple of pint.

First leg of today’s journey was along the coast toward the ferry in Tarbert.

Honestly there are way to many nice places and viewing points to stop at all of them, but one of my favourites must have been Conor Pass. It’s the highest elevation mountain pass on the Wild Atlantic Way. Absolutely breathtaking.

As for moutain pass the visibility was very poor.

and eventually  into the Burren.

The Burren is one of my favourite places in Ireland so I was extra happy to visit on a bike.

We tried to avoid obvious tourist traps (such as Cliffs of Moher) but couldnt resist stopping at Alleide ( place I often visit for its climbing).

The Burren’ s roads are so narrow that its very common to get stuck behind a bus for 1h without an option to overtake. But we we  we headed towards total side roads where no buses go (nor anyone else). Another Louis special 😉

From there straight to Galway for city camping. 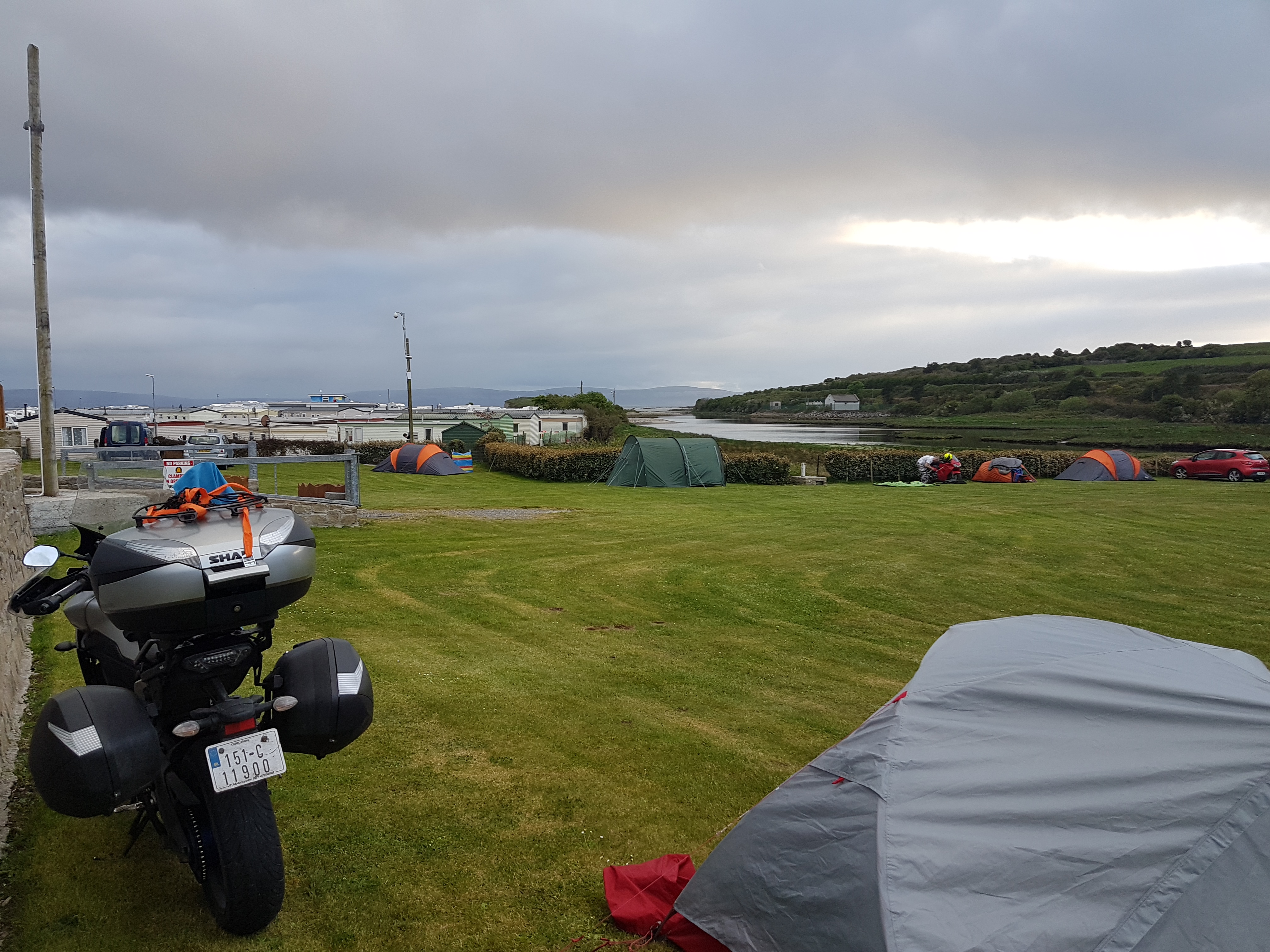 Experience tough me to pitch away from Dave’s tent aka snorting covern.

As for the bikes: they are holding very well! My tires are completely gone though.  I just have to power through on the motorway to Dublin tomorrow. 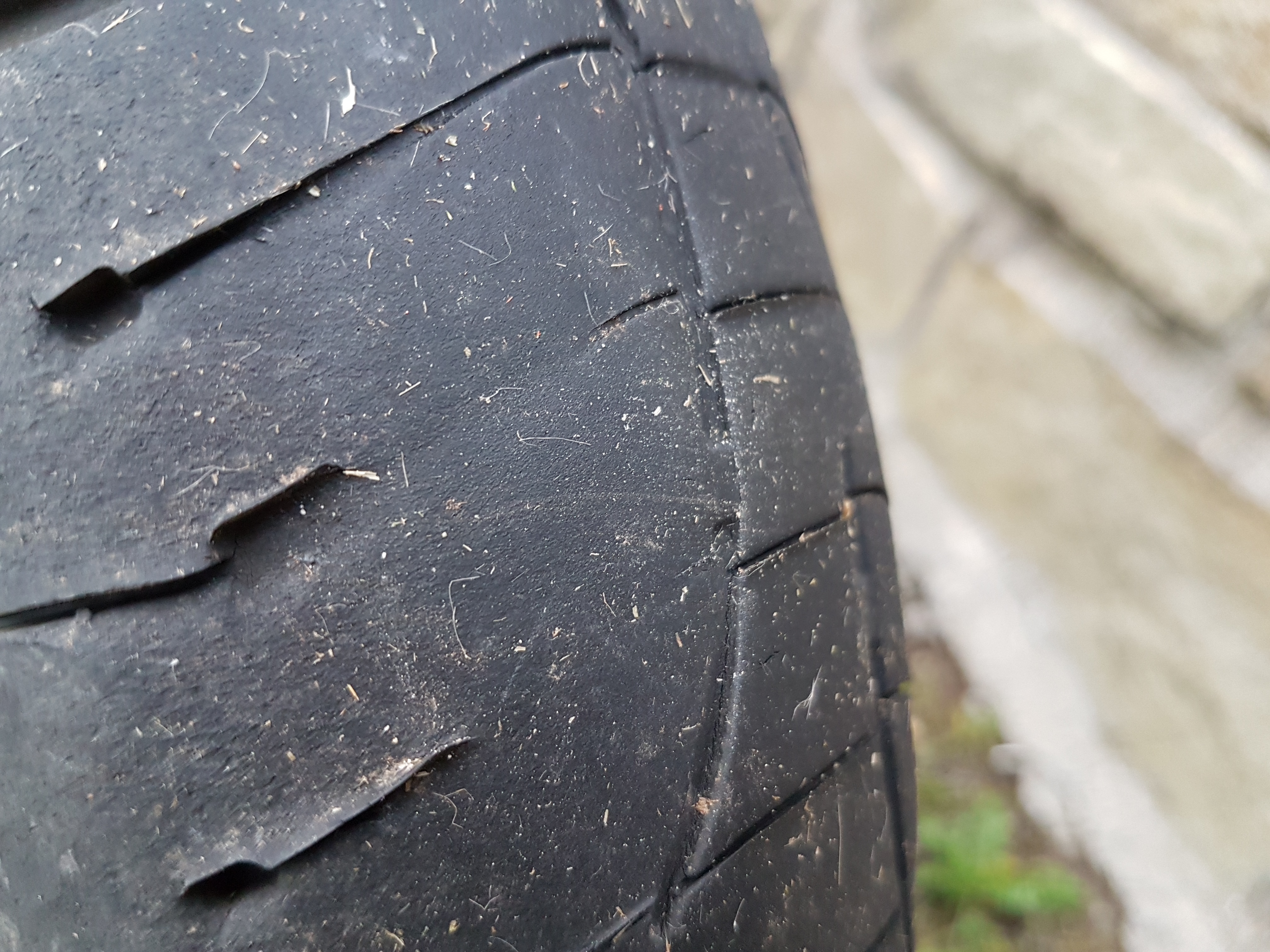 I’m not going to go into turn by turn detail of out todays route as its almost imossible. There was a lot of twiesties and tournies. I’ll just say that we stretched the 44 km direct route from Cacherdaniel to Dingle into a 390 km mega marathon via places like:

We missed a lot of photo opportunities/stops but if were to stop at all of them it would take us 16h to get to Dingle.

One thing i got to say though – no matter how good or bad  the weather is this entire area is just amazing. If you ever decide to come here remember to leave your accomodation early as there is nothing worst than being stuck behind a lime of cars. We were lucky enough that there weren’t to many cars out today.  Definitely a win.

Obviously it was raining almost all day. Obviously we got wet. Not a big deal. It was always a matter of ‘when’, not ‘if’. Especially true in the west of Ireland.

The day started with a little unfortunate bike dropping incident. Dave’s VFR tipped over. No major damage. Just some cracked fairing. All good.

We started of via scenic route to Baltimore. Full Irish breakfast is the way to go for another long day. We made a quick stop by the Beacon and moved towards Mizen Head.

When I say towards I don’t mean the most direct route. It is usually the most obscure road. The one with a patch of grass in the middle. You know what I am talking about.

We also called in to Crook Heaven? Home of the most southerly pub in Ireland.

Moving along the northern tip of that peninsula we went on but due to fuel contraints we continued to Bantry to refuel.

From there went towards Dursey island, but on the way we diverted that to go up and down Healy Pass. One of the most awesome road in the country.

Moving on, next stop was Kenmare. It was raining on and off even though u cant see that on the photos.

Quick shopping and fuel stop there and we were on the world famous Ring of Kerry.

We decided to stop at Caherdaniel for a camping by the beach. Can’t beat that setup. 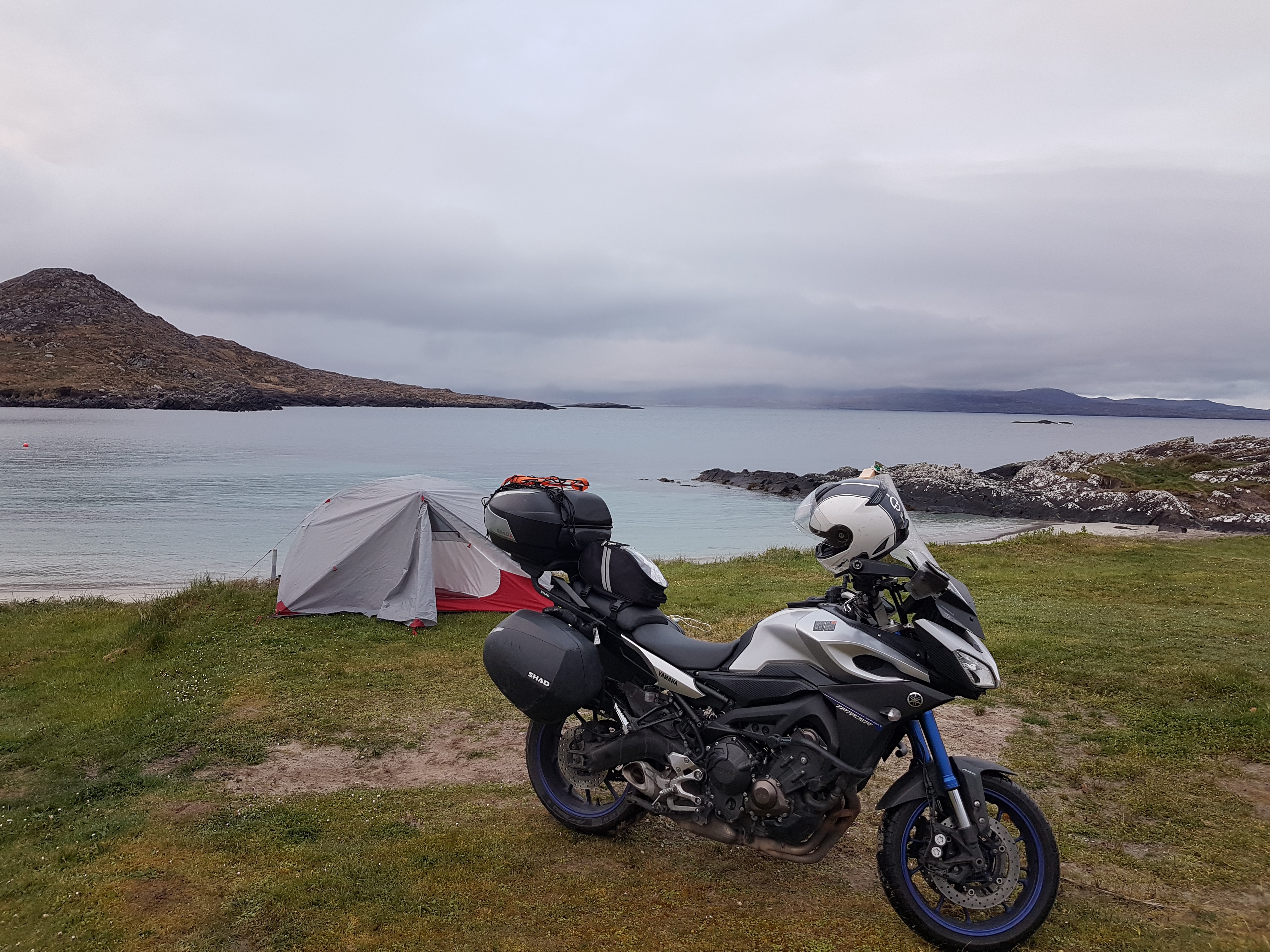 This was another very long day with some 8h on the bikes. This is takings its tall on everyone’s backs. Totally worth it though!

Each one of us had their own mechanical or electrial issues but its all behind now. Bike are packed up and we are all ready to go!

It is time to start the trip – destination – wild atlantic way. Or at least part of it. Dave and I willl have to call it quits on Monday, (due to tight work schedule). By then we should be in Galway, roughly half way thru. Louis will press on until Saturday week. The whole way.

Dave and I started the journey  together  roughly 1h ahead of Louis and decided to skip the motorway in favour of going via back roads. The first leg of the trip to West Corm  taken longer but spared the boredom of cruise control travel (that neither of us have).

We were very late reaching Cork and when Louis called us from Kinsale we were 1.5 behind him. We decided then to change direction west and meet at the camp site in Skibereen.  That meant not getting to the coast but it was ok. We still seen nice places! Places thay nobody ever stop by in. Not exactly WAW, but theybhad their charm.

After travelling 400km we reached The Hidaway campsite in Skibbereen around 7.30pm. Louis wasnt long to join us shortly after.

Tomorrow we keep going west and hoping to finish around Ring Of Kerry (Caherdaniel). The plan is simple from now: “if the ocean isnt on our left, we are doing it wrong”.